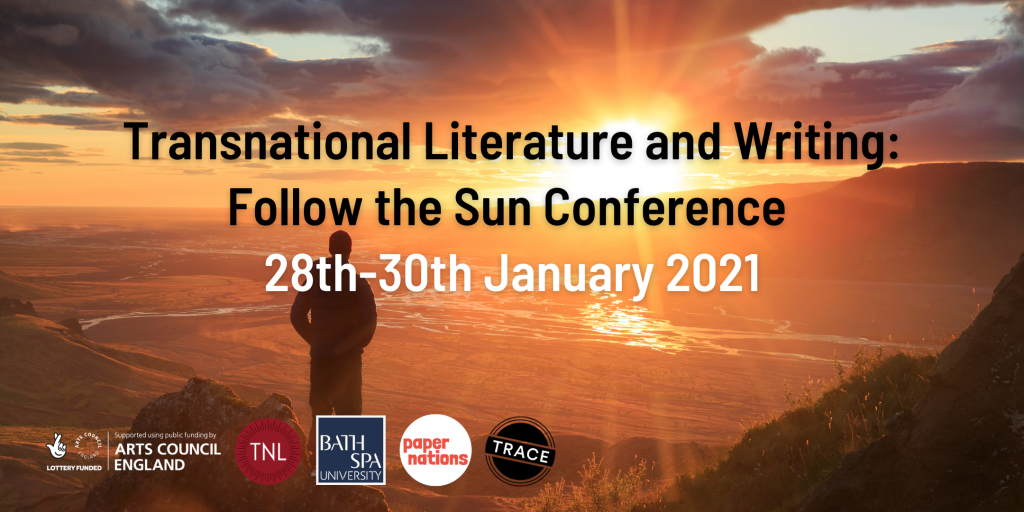 Our inaugural Transnational Literature and Writing Conference, Follow the Sun, took place on 28-30th January 2021. The conference was hosted by TRACE at Bath Spa University. However, the conference had no fixed abode, as it took place entirely online. The opening event happened as the day began in Adelaide, Australia; subsequent events were programmed to ‘follow the sun’ as the morning traveled around the world. Delegates joined in as the conference passed through their time zone, and watched anything they’ve missed on replay.

The key theme of Follow the Sun was ‘place and displacement’. This was inspired by a phrase used by Aminatta Forna, who was a keynote speaker at the conference. She said that in 2020, ‘we have seen place displaced’: on the one hand, many of us have become used to meeting online and were able to attend a conference which is untethered to place; on the other, many of us found it increasingly hard to move freely in the physical world as borders were closed and movement was controlled. In one sense, we were able to ‘follow the sun’, in another we were more bound than ever to our localities.

We had 16 events, and more than 40 speakers; from panels on erasing borders, to performances on individual isolation and alienation, plus the opportunity to participate in an additional Masterclass on performance poetry in the online world. The conference sparked conversation, built networks and presented some of the most interesting voices in the field of Transnational Literature and Writing.